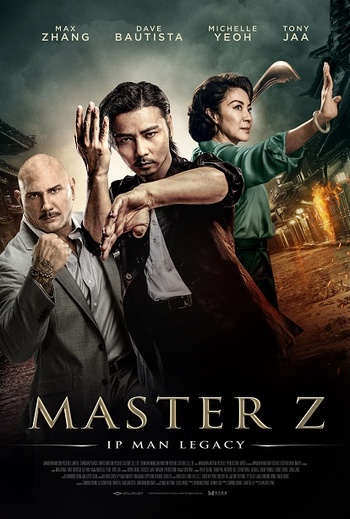 Master Z: The Ip Man Legacy is a 2018 Hong Kong/Chinese martial arts movie directed by Yuen Woo-Ping. It is a Spin-Off of the Ip Man film series, and focuses on Cheung Tin-chi (played by Zhang Jin aka Max Zhang), who first appeared in Ip Man 3. The cast also includes the likes of Michelle Yeoh, Dave Bautista and Tony Jaa.

Cheung Tin-chi is now trying to live a normal life after swearing off Wing Chun following his defeat against Ip Man. Unfortunately, he cannot find peace so easily, and must put his fighting skills back into use after he accidentally saves people from a drug-dealing gang.

The film was followed by a return to the main series with Ip Man 4.

A sequel was confirmed in April 2019, with Max Zhang set to reprise his role.