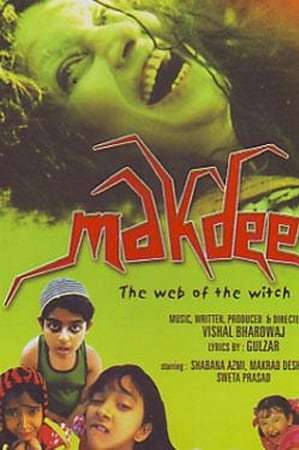 Makdee (Spider) is an Indian-made kids' adventure thriller released in 2002.

Life in Chunni's village is peaceful, and fun for Chunni, as she fools the villagers with her impersonation of her twin sister, Munni, and plays pranks on everyone.

However, in the village, there is a mansion that is said to be haunted and legend goes that a witch called Makdee resides there. The legend has it that whosoever wonders into the mansion, comes out as an animal. When one of Chunni's pranks backfires, Munni is mistaken for Chunni and chased into the mansion, where she is changed into a hen. Chunni freaks out and tells everyone else about what happened, but her reputation in the village doesn't help her cause, and no-one believes her.

She enters the mansion alone to search for her sister, where she pleads with the witch to let her go. But the witch gives her a deal: she will turn Munni back into a human only if Chunni can steal a hundred hens in exchange.

Chunni then has to worry about Munni possibly being killed by the local butcher, as well as having to actively fake the role of both herself and her sister, while she tries to pacify the witch to get her sister back.