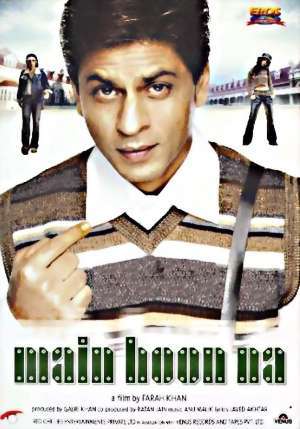 "Hey, this was in 'The Matrick'?"
"You mean Matrix?"
Advertisement:

A Bollywood film set in modern day India. Starts off with a supersoldier named Ram foiling an assassination attempt on an Indian general by an anti-Pakistan terrorist. Ram's father is killed in the attack, but not before revealing that Ram has a long-lost half-brother named Lakshman who is still in college. The General then tasks Ram with protecting his daughter, who by coincidence attends the same college as Lakshman.

So Ram goes back to college, where he discovers that his brother, known to everyone as Lucky, is the Big Man on Campus who regularly leads the rest of the student body in cheerful Crowd Songs. Hilarity Ensues.

The resulting three hour Cliché Storm is half-Die Hard, half-High School Musical, rolled into a Bollywood song-and-dance epic. Whether it was intentional or not, comes off as a brilliant parody of multiple Western genres. The sharp-eyed viewer will also note that the plot loosely follows the story of the Ramayan (as is lampshaded by the character names), which occupies a similar place in Asian cultures as the King Arthur stories do in the West. Well worth a hardcore Troper's time.

Main Hoon Na is Hindi for "I am here."