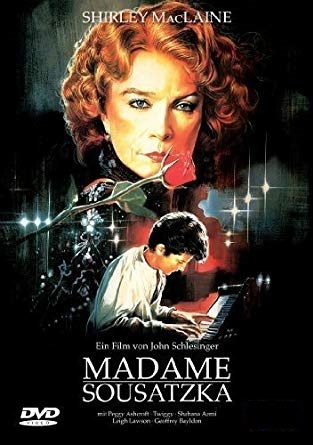 Madame Sousatzka is a 1988 British drama film directed by John Schlesinger, based upon the novel of the same name by Bernice Rubens, and featuring Shirley MacLaine as the title character.

Bengali immigrant Sushila Sen lives in London with her son Manek, who is musically gifted. Manek studies the piano with Madame Sousatzka, who is a Russian-American immigrant. Madame Sousatzka, while highly talented, never succeeded as a pianist and thus lives through her students, particularly talented ones such as Manek. Manek is soon forced to choose between Madame Sousatzka and his mother who both compete for his attention.