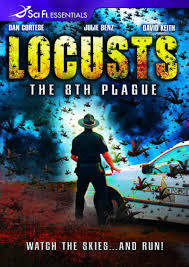 Locusts: The 8th Plague is a 2005 Sci-Fi Channel horror movie about killer locusts attacking a town in Idaho.

The story involves a company trying to genetically engineer carnivorous locusts that would eat other insects instead of crops. But of course (given the genre) they create bugs that eat everything with flesh instead, and of course they accidentally escape and begin attacking people.

A local entomologist, his veterinarian love interest, and a special government agent try to find a way to kill the swarm, while the people responsible for the disaster try to destroy the evidence against them.

The title is a reference to the eight plague brought by God on the Egyptians as mentioned in The Bible, though the movie itself has nothing to do with that (other than the inclusion of a doomsayer character who keeps quoting the bible.)

Tropes in Locusts: The 8th Plague: