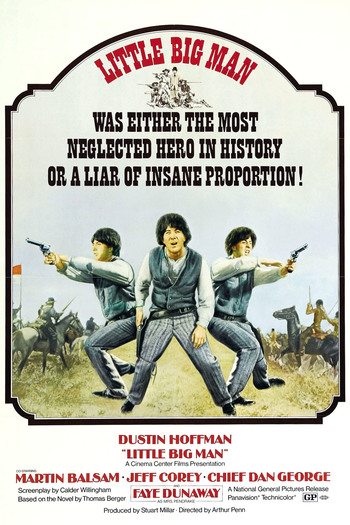 Little Big Man is a 1970 film directed by Arthur Penn. The screenplay is by Calder Willingham, adapted from the 1964 novel of the same name by Thomas Berger. It's in some ways a parody of the Western genre, in some ways a Deconstruction.

Dustin Hoffman stars as Jack Crabb, a 121-year-old survivor of the Battle of the Little Bighorn. But there's more to his life story than that: life as an adopted Cheyenne, a Snake Oil Salesman, an amateur gunslinger, and an attempt to go straight before he gets embroiled in the mad dreams of a general named George Armstrong Custer. Faye Dunaway appears as Mrs. Pendrake.