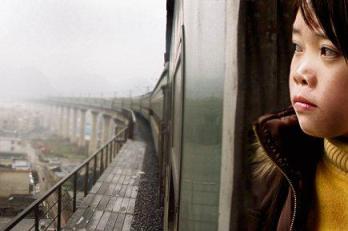 You haven't yet tasted the bitterness of life.

Last Train Home (归途列车) is a Documentary by Chinese-Canadian director Lixin Fan released in 2009. It follows a typical migrant worker family over a three-year period.

There are, in China, some 130 million mingong, workers from the hinterland's countryside who move to the big coastal cities in search of employment. Their underpaid toil feeds the Chinese export-oriented economy and provides Western consumers with cheap goods. Every year during the Spring Festival, they all go home at the same time, in order to spend a few days with their relatives. The result is the world's largest human migration.

Zhang Changhua and Chen Suqin are two such migrants. They have moved from rural Sichuan to Guangzhou (Canton) in order to work in the textile industry and save enough money to give their two children a good education. But teenage daughter Qin resents their year-long absence, and decides to seek employment as an unqualified worker rather than complete high school.