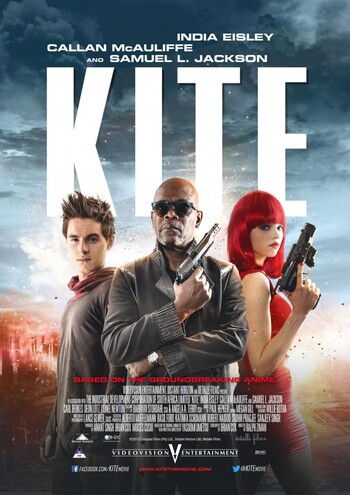 Kite is a 2014 adaptation of the anime of the same name, written by indie director Brian Cox (not to be confused with the more famous actor of the same name), and directed by Ralph Ziman.

The main difference from the original is that the movie is set in an unnamed dystopian Wretched Hive, with entire districts outside of police control and with human traffickers doing as they please. Karl Aker (Samuel L. Jackson), a Knight Templar Dirty Cop, helps Sawa (India Eisley), the daughter of his murdered partner, exact revenge on the crime lord known as the Emir, who supposedly had Sawa's parents killed years prior. However, while staking out Emir's underling Jeppy, Sawa is ambushed by a street gang called the Numbers and rescued by a mysterious young man named Oburi, who seems to know about her past.