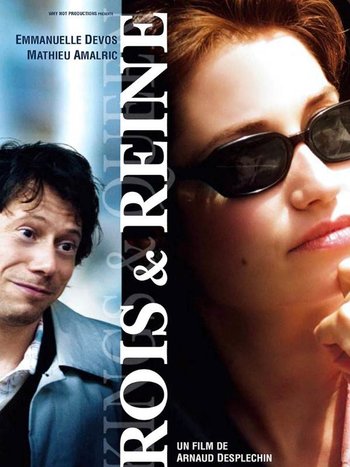 Nora Cotterelle (Emmanuelle Devos), a woman in her 30s, is caring for her ill father, Louis Jenssens (Maurice Garrel). While Nora tries to present a facade that all is well with her life, she is both widowed and divorced, and has a son, Elias, whose father she married posthumously note Posthumous marriage is legally possible in France under some conditions. Elias has behavior problems due to his autism, and Nora is soon to marry a wealthy man.

A parallel storyline follows Nora's former lover, Ismaël Vuillard (Mathieu Amalric), a musician, with whom she had lived for seven years. His strange behaviour gets him interned in a psychiatric hospital, from which he plans to escape. He also has to regularly see a psychiatrist, Dr. Vasset (Catherine Deneuve).

Nora learns that her father is dying of cancer, and she desperately seeks out Ismaël to ask that he reconnect with Elias, but he has mixed feelings about adopting her son. Ismaël also starts bonding with Arielle, another patient.

Kings and Queen provides examples of: