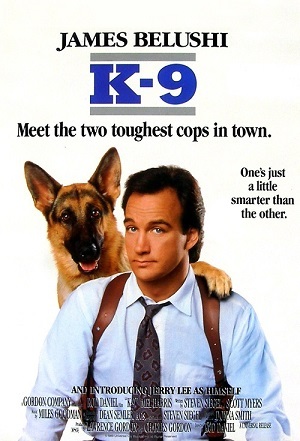 K-9 is a 1989 thriller-comedy film starring James Belushi and Mel Harris, and directed by Rod Daniel.

San Diego Police Detective Michael Dooley (Belushi) has a problem: He's been tagged for execution by a major international drug dealer named Lyman (Kevin Tighe). In order to help him put Lyman away for good and thereby save his bacon, Dooley's friend Sergeant Brannigan of the K-9 unit (Ed O'Neill) gives him a drug-sniffing police dog named Jerry Lee (played by a real-life police dog named Koton), with whose aid Dooley attempts to put Lyman in prison for good. Now Dooley has another problem: Jerry Lee is a Deadpan Snarker with a mind of his own.

Not to be confused with the occasional robotic companion of Doctor Who, nor with said tin dog's eponymous spinoff series. The film was released the same year as Turner & Hooch, an unrelated film with a similar premise.