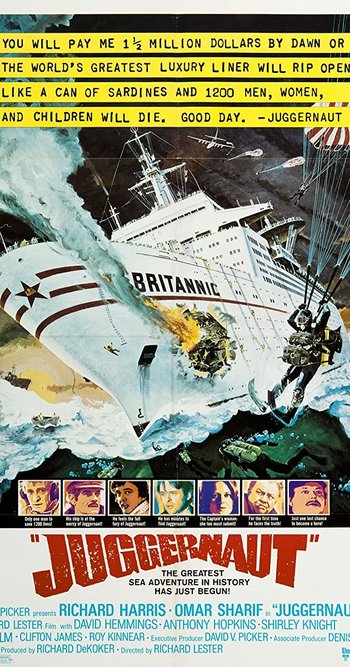 Juggernaut (aka Terror on the Britannic) is a 1974 thriller film directed by Richard Lester and featuring an All-Star Cast headed by Richard Harris, Omar Sharif and Anthony Hopkins.

An extortionist hides six time bombs on a cruise liner, the SS Britannic, and demands a £500,000 ransom in return for information on the bombs' locations and instructions on how to disarm them without setting off their booby traps. A Navy bomb disposal team, led by Lt Commander Fallon (Harris), is flown out to the ship and attempts to disable the bombs, while on land a team of investigators led by Superintendent McLeod (Hopkins), whose family are on board the Britannic, race against time to uncover the identity of the bomber.