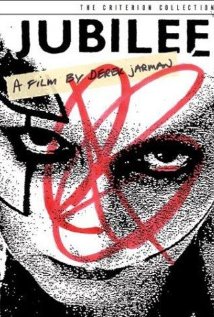 Sex, drugs and punk rock. Add violence and time travel and you have Jubilee.
"And the world's your oyster, so swallow it."
— Crabs

Queen Elizabeth I asks her court physician, John Dee, to show her what England will be like in the future, with the air spirit Ariel from The Tempest acting as their guide. The resulting spell propels them 400 years into the future, only to find that England has turned into a wasteland riddled by vicious girl gangs and a demented record producer.