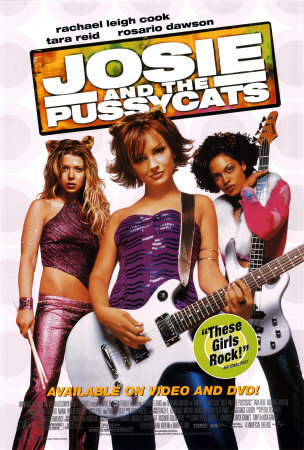 Josie and the Pussycats is a 2001 film adapted from the comic of the same name, starring Rachael Leigh Cook, Rosario Dawson and Tara Reid. It is about the titular all-female rock band getting the deal of a lifetime after struggling as an indie band — a record deal with MegaRecords, one of the largest music labels in the world.

Within a week, the band has skyrocketed to the top of the charts, and a legion of squeeing fans is following their every move. Unfortunately, there was some fine print in the contract that they should've read before they signed... you know, some stuff about having subliminal messages put in your music to sell stuff, and "dying tragically" in a plane crash or from an overdose if you find out and resist. That sort of thing.

There was a huge legal brawl with Archie Comics over them getting residuals and/or royalties from the movie. In the end, the film was a Box Office Bomb, and its failure did lasting damage to Rachael Leigh Cook's film careernote (she's been relegated to Direct to Video and Made For TV Movies ever since). In spite of all this, it has become something of a cult hit on VHS and DVD.

Alternative Title(s): Josie And The Pussycats