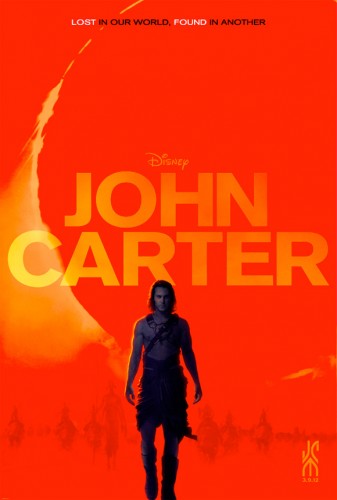 "Find a cause. Fall in love. Write a book! Do something with your life."
— John Carter, to his nephew, Edgar Rice Burroughs
Advertisement:

John Carter is a live-action film released on March 9, 2012. It was released by Walt Disney Pictures and is based upon A Princess of Mars, the first novel in the John Carter of Mars series by Edgar Rice Burroughs. It is directed by Andrew Stanton, best known for directing Finding Nemo and WALL•E.

In 19th century America, a Civil War veteran and wealthy traveler named John Carter has suddenly died. His nephew is instructed to read his private journal...

Years ago, Carter comes across a cave of gold with strange inscriptions. Inside, he finds a medallion that transports him to the planet Barsoom, known to Earthlings (or rather, Jahsoomians) as Mars. The lower gravity gives him enhanced strength and the ability to jump great distances. He encounters human-like copper-toned Martians called Red Men, and four-armed, green-skinned Martians called Tharks. Though he just wants to go home, his otherworldly abilities get the attention of a Thark chief, Tars Tarkas, and of a Red Man princess, Dejah Thoris.

Carter becomes involved in a war between factions of the Red Men, encouraged by a third group of aliens, the pale Therns. He discovers that the Therns have Earth in their sights as well...