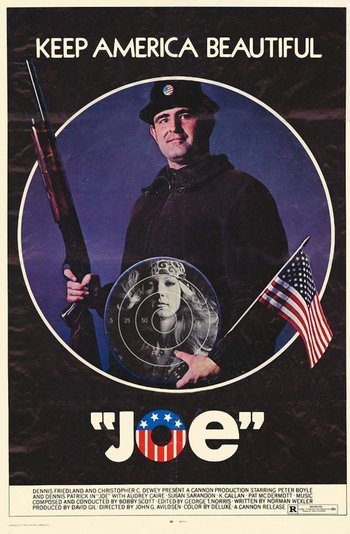 Where you going with that gun in your hand?

Prosperous New York City ad executive Bill Compton (Patrick) kills his daughter's drug dealer boyfriend Frank in a fit of rage after she overdoses and winds up in the hospital, then—after stealing his drugs—flees to a local bar to calm down. There, he overhears factory worker Joe Curran (Boyle), who hates hippies, blacks, and anyone who is "different", ranting and repeatedly saying "I'd love to kill one". Compton accidentally blurts out "I just did", faking a smile after realising he's made a public confession.

Days later, Joe reads about a drug dealer murdered blocks from the bar, and immediately realises Compton was the killer. He contacts Compton, and the two form an odd friendship, introducing each other to their respective friends and family.

During an awkward dinner with the men and their wives, Bill's daughter Melissa (Sarandon), having escaped from the hospital, comes home, overhears him confess to the murder and storms out of the apartment, asking her father, "What are you gonna do, kill me too?" He tries to stop her, but she breaks away.

Bill and Joe search Greenwich Village for Melissa. During their search, they meet a group of hippies at a bar. Joe and Compton tell the hippies they have drugs, and are invited to join them at a pot party. The hippies steal the rest of the drugs plus Joe and Compton's wallets.

When he discovers the theft, Joe beats one of the girls until she tells him that their boyfriends often spend time in a commune upstate. Joe and Compton drive to the commune, bringing along some rifles and ammunition, "just to scare them." When they see the hippie thieves and demand their wallets back, one of the thieves tosses their empty wallets and begins to run away. Joe shoots the thief and goes on a rampage, firing at everyone in the commune. Compton protests, but Joe ignores him, mowing down anyone in his path — including people who had no involvement in the theft.

When more hippies arrives at the door and Joe is out of ammo, he encourages Compton to join in. Compton shoots and kills several of them, and a girl in the group flees out of the building. Compton runs to the doorway and fires at the fleeing girl's back, hitting her. As she falls, she is revealed to be Melissa. Compton cries out her name and he hears in his mind, once again, her voice asking, "What are you gonna do, kill me too?"

The character of Joe is a clear influence on the much less violent but similarly prejudiced Archie Bunker in All in the Family, which debuted only a couple of years after this movie. Peter Boyle was so appalled at the Misaimed Fandom directed at Joe—apparently much of 1970 America was OK with hippie-murdering—that he turned down several roles in films that glorified violence, including The French Connection.

Not to be confused with the 2013 film of the same name starring Nicolas Cage.