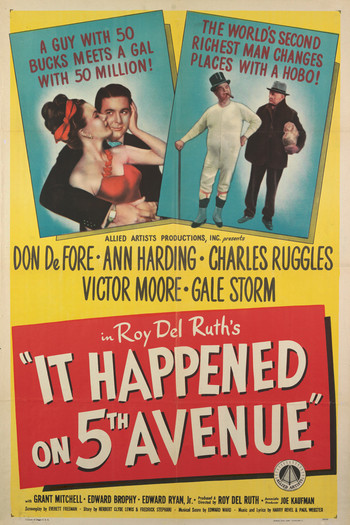 Aloysius T. "Mac" McKeever (Moore) is an itinerant hobo who spends his winters living in a Fifth Avenue mansion owned by the wealthy industrialist Michael O'Connor (Ruggles), left vacant and boarded up each year while O'Connor and his family are relocated to Virginia until spring. He sneaks in through a manhole, turns on the heat and electricity, helps himself to some of the generous food supply in the larder, and even "borrows" O'Connor's clothing.

One day in the park Mac encounters Jim Bullock (DeFore), a war veteran who has recently been made homeless thanks to O'Connor buying his apartment building and demolishing it to build an office building in its place. Mac generously offers to put Jim up in "his" mansion, and Jim readily accepts. Unbeknownst to either of them, O'Connor's rebellious 18-year-old daughter Trudy (Storm) has run away from boarding school and soon makes her way back to the mansion, where she enters one night to collect some of her clothes. Thinking she's a burglar, Mac and Jim confront her and Jim threatens to call the cops... until Mac quietly pulls him aside and explains his own illicit arrangement. Trudy overhears Mac's confession and, for her own amusement, decides to play along and pose as another homeless person. Naturally, she's invited to stay at the mansion too, and soon finds herself attracted to Jim. Shortly thereafter, Jim runs into an old Army buddy and his family, who are living out of their car due to the city's postwar housing shortage and could sure use a place to stay...

Meanwhile, O'Connor tracks his wayward daughter down and tries to take her back to the boarding school, but Trudy tells him about the nice young man she's fallen in love with and spills the beans about the whole squatting situation. She begs him to play along for a while so Jim won't find out she's a wealthy heiress and will love her for herself. O'Connor reluctantly agrees, and poses as another yet homeless person who Trudy invites to the mansion. Mac, who's increasingly put out at having to share "his" home with an ever-growing list of strangers, starts lording it over the newcomer, scolding him for failing to do his share of the household chores and so forth. Then O'Connor's estranged wife Mary (Harding), Trudy's mother, comes into the picture...