Film / Instead of Abracadabra 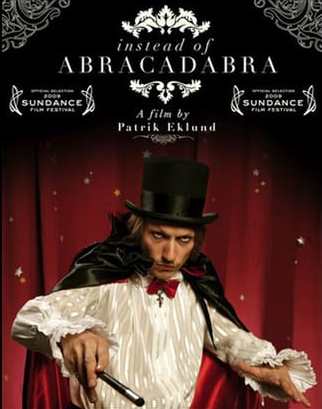 Instead of Abracadabra is a 2008 short film (22 minutes) from Sweden, directed by Patrik Eklund.

A 25-year-old man who might be generously described as a loser lives at home with his parents. Thomas has dreams of being a stage magician, but he is terrible at it. As the movie begins he is wearing an eyepatch after having poked himself in the eye with a spring-loaded flowers trick. He then nearly kills his mother Gunilla while performing the "Indian basket trick

", that being the trick where someone gets in a box and the magician stabs the box with swords.

His father Bengt is fed up with Thomas's dreams of being a magician and is strongly pressuring him to get a real job. Meanwhile, Thomas has developed a crush on Monika, a very pretty single mother who moved in next door. Thomas decides to prove himself to both Bengt and Monika by performing at his father's 60th birthday party.