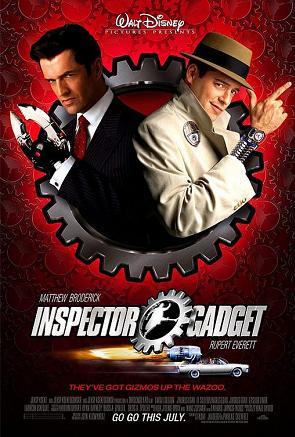 The greatest hero ever assembled.
Advertisement:

The movie opens with an origin story for the titular hero (Broderick). Originally a human security guard named John Brown, he dreams of one day being a respected police officer, though he is continually rejected due to his lack of experience. He also has designs on Brenda Bradford (Fisher), a scientist that works at the cybernetics lab he's employed for. After the lab creates a prototype for a computer chip that can control lifelike robotic limbs, Brown's life changes as Corrupt Corporate Executive Sanford Scolex (Everett) breaks into the lab, kills Brenda's father, and makes off with the prototype foot. When Brown pursues him, the resulting car chase ends with Scolex blowing up his car and leaving him with extensive tissue damage. In the aftermath, a bowling ball from Brown's car flies into the air and lands Scolex's own left hand, crushing it to pieces and leading to him getting a selection of cybernetic replacements. His favourite replacement (because it looks cool) is a metallic crab-claw. He dubs himself "Claw." As for Brown, Brenda decides to make him the prototype for the "Gadget Program" and repairs his damaged body by converting him into a cyborg with numerous odd and zany functions—and his own talking wisecracking car the Gadgetmobile (voiced by D.L. Hughley). Now dubbed "Inspector Gadget," he realizes his dream of joining the police force - though his generally goofy and awkward nature and lack of control over his new hardware makes him something of a walking disaster area. Meanwhile, Scolex still has designs on the technology that created him, as he plans to use it to build an unstoppable robot army to take over the world...

It was successful enough for Disney to produce a direct-to-video sequel, Inspector Gadget 2 (2003), though none of the original cast returned (except for D.L. Hughley who reprised his role as the Gadgetmobile).