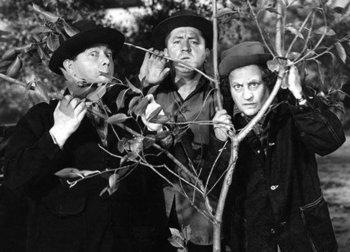 If only they'd seen that sign that said
"NO SMOKING, NO HUNTING, NO FISHING, NO NOTHING. GO HOME."
Idiots Deluxe is the 85th short subject starring The Three Stooges, released on June 20, 1945.
Advertisement:

Moe is on trial for assaulting Larry and Curly during a Horrible Camping Trip. Moe appeals to the judge (Vernon Dent), claiming he is a sick man who was instructed by his doctor to maintain peace and quiet, and the audience is shown what happened from there.

Moe's peace was broken by Larry and Curly, who were loudly rehearsing their "The Original Two-Man Quartet" routine. Moe cracked, and wrapped Curly's trombone slide around the "quartet's" necks. Realizing Moe is in bad shape, Larry and Curly decided to take their ailing leader on a hunting trip in the woods to relieve his stress. Moe agreed, but the trip was anything but relaxing after the trio were hounded by a bear.

This was the last short produced before Curly suffered from the stroke that would negatively affect his performance in the next shorts.