Film / I Even Met Happy Gypsies 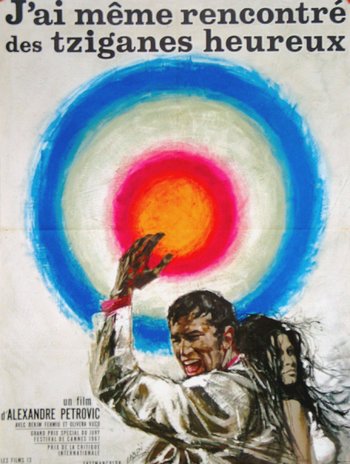 I Even Met Happy Gypsies ("Skupljači perja", "The Feather Gatherers") is a 1967 film from the former Yugoslavia, directed by Aleksandar Petrović.

It is about the Romani, or "Gypsy", community of Yugoslavia. These Romani are not nomadic but have settled down in a village. Bora, the protagonist, is the sort of fellow who drinks, hits women, attempts to buy women, and gambles until he literally loses his shirt. He's also a Lothario who is having an affair with a married woman, seems to be Friends with Benefits with a local singer, and is pursuing Tisa, a curvaceous teenaged girl. Tisa wants out of their grubby little village, but her stepfather Mirta has pledged her in marriage, to a 12-year-old boy.