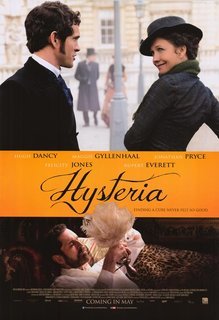 It starts with our male protagonist Mortimer Granville (Dancy) working as a doctor at a hospital. He gets fired for believing in silly new fads such as germ theory, the idea that doctors should wash their hands before surgery, that soiled bandages should be replaced and the idea that diseases and infections are caused by tiny invisible monsters that are not spiritual in nature.

As he finds a new job at a clinic for hysterical women, he quickly run into a woman (Gyllenhaal) who is just as crazy as he is: she actually believes in equal rights, or at least rights at all, regardless of class and gender, stirring up all kinds of trouble with outlandish demands such as the ideas that women ought to be allowed to vote and that even poor people should get education and healthcare.