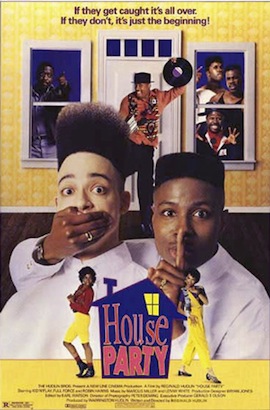 Who's ready to blow the roof off this joint?!
Advertisement:

House Party is a series of hip-hop comedy films that began as starring vehicles for the rap duo Kid 'N Play (Christopher Reid and Christopher Martin). As the title suggest, each movies find the protagonists hosting a party, though at different locations and for different reasons.

The first movie, released in 1990, was centered around a house party hosted by Play as his folks were out of town. Kid is invited of course among a slew of other friends. However the day of the party, he gets in trouble with the local bullies (R&B group Full Force) and causes a fight at his school. His father (comedian Robin Harris) is informed of this and bars Kid from going to the party. Kid manages to sneak out anyway and hilarity ensues both at the party and afterward proving to be a long night for everyone involved.

The second film (1991) sets Kid, now living with Play after his father died (as Harris had died not long after finishing the first movie) off to college thanks to some charity of his local church. This is much to the chagrin of his friend who wants Kid to go into music with him after they got the attention of a record producer. Misfortune however befalls Kid no sooner then he starts his semester after he gets conned out of his tuition money. One thing leads to another before the duo wind up hosting a party on the campus to help Kid stay in college.

The third movie (1994) see Kid getting married to his girlfriend Veda (who was introduced in this movie rather than his past girlfriend Sidney (Tisha Campbell). Play meanwhile has gone into the music business as a manager to a female rap trio, Sex as a Weapon (TLC). Of course though things get complicated before everything winds down to a bachelor party thrown for Kid. This film was notable for debuting Chris Tucker and featuring the rap group Immature (later known as IMx) who play Kid's nephews. It was the last movie to feature a plot revolving around Kid 'N Play but not the last to feature them altogether.

And speaking of IMx, seven years after part 3 came and went in the theaters. A fourth movie was made in 2001 that was an egregiously low-budget direct to video feature, staring said rap group. Subtitled Down To The Last Minute, the film focuses on Jon Jon (Marques Houston, playing a completely different character from the third movie) house sitting for his rich and overly strict Uncle Charles's mansion, being told right from the get-go not to have anyone over, especially Jon Jon’s best friends: Mark and T (Jerome Jones and Kelton "LDB" Kessee, Houston's fellow bandmates). Of course Jon Jon quickly disobeys him once he’s out of sight and throws a bash. Inevitably Charles' vacation goes south and he's set to come home, forcing Jon Jon and his friends to frantically fix up the house or face Charles' wraith.

After that film was poorly received and flopped in sales, the series supposedly fell by the wayside and was thought finished. But much to many a surprise, a fifth film, Tonight's The Night, was released in 2013. A legacy sequel to the ‘90s trilogy, this film instead features new characters and follows the protagonist Chris (Tequan Richmond) finishing high school but will end up leaving his best friend and crush. So he plans a party for her which of course leads to complications and hijinks. Like the last film, it was a direct to video fare and even features a cameo by Kid 'N Play reprising the roles of their fictional selves. In the years that have passed since the third movie, the pair now have their own record label - accomplishing a goal they decided on at the end of the second movie and pursued throughout the third. No other characters from the Kid n Play era are featured or mentioned.

In 2022, a modernized sixth film was produced by LeBron James’ production company Spring Hill Entertainment. This time around, house cleaners and aspiring club promoters Damon and Kevin decide to host a giant blowout at Lebron's mansion while he's away in an attempt to make some big money after being fired from their job. Several big-name entertainers and sportspeople, including James himself, are confirmed to appear in the movie, alongside previous franchise stars Kid 'N Play reprising their roles in an unknown capacity. The film was set to debut on HBO Max in August 2022, but was instead transferred to a theatrical release by Warner Bros. Discovery, dated for January 13, 2023.

House Party and its sequels provide the following tropes:

I Wouldn't Do That Just Yet...

"'Cause your ass is mine!"<br><br>After managing to avoid his dad's wrath during a night of partying and arrests, Kid sneaks into his house seemingly unnoticed... only to see his dad waiting for him, belt in hand. The ensuing ass-whupping occurs offscreen during the credits roll.

I Wouldn't Do That Just Yet...

"'Cause your ass is mine!"<br><br>After managing to avoid his dad's wrath during a night of partying and arrests, Kid sneaks into his house seemingly unnoticed... only to see his dad waiting for him, belt in hand. The ensuing ass-whupping occurs offscreen during the credits roll.