Film / House by the Lake 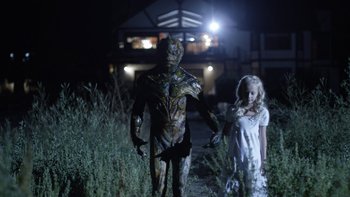 House by the Lake is a 2016 American independent horror psychological-thriller film starring Amiah Miller, a child actress who rose to fame when War for the Planet of the Apes came out. The film is a partial reimagining of Creature from the Black Lagoon.
Advertisement:

Amiah Miller plays Emma, an angry, anti-social and unusually quiet girl who despises her parents (Scott and Karen) as well as her nanny (Gwen) and wants to go live in the water with her allegedly imaginary friend the Fish Man.

House by the Lake contains examples of: