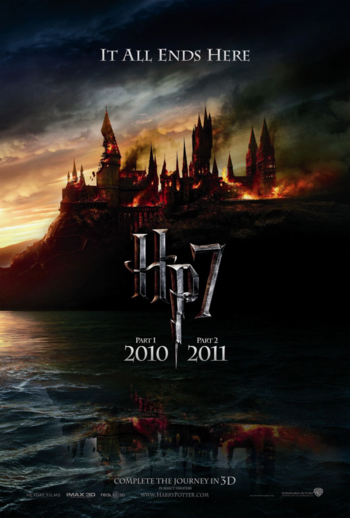 The Grand Finale of the Harry Potter film saga, based on the eponymous book. It was split into two films (Part 1 and Part 2), to include as much of the material as possible. David Yates directed both instalments. They were respectively released in 2010 and 2011.

Harry, Ron and Hermione are on the run as Voldemort has infiltrated the Ministry of Magic and taken over the British wizarding world, including the wizarding school of Hogwarts. Their only hope to defeat Voldemort lies in destroying all his Horcruxes. Nowhere is safe, most of their previous support is gone, and it's a complete madhouse at Hogwarts.

The split between Part 1 and Part 2 is after chapter 23 of the book.

Harry Potter and the Deathly Hallows Parts 1 and 2 contain examples of:

open/close all folders
Both films
Part 1 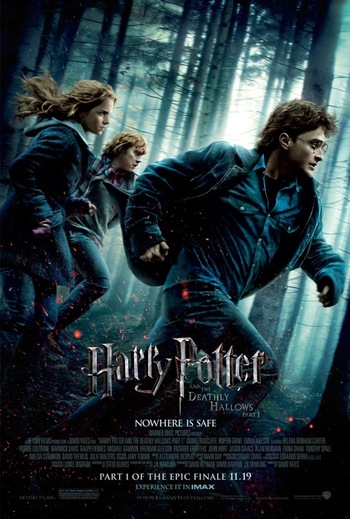 "I have to start finding these Horcruxes. They are our only chance to beat him. And the longer we stay here, the stronger he gets."
Part 2 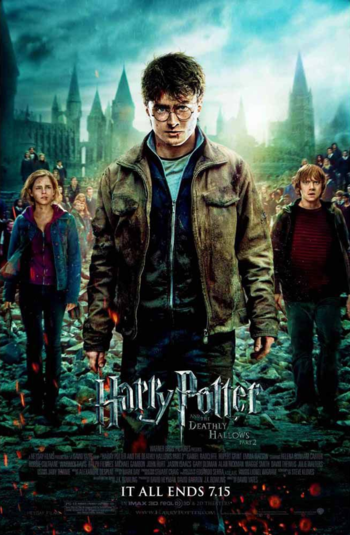 "Do not pity the dead, Harry. Pity the living. And above all, those who live without love."
Advertisement:
"Come on, Tom. Let's finish this the way we started it: TOGETHER!"
Feedback

"Yeah? You and whose army?"

Neville says this line to an actual army.

"Yeah? You and whose army?"

Neville says this line to an actual army.