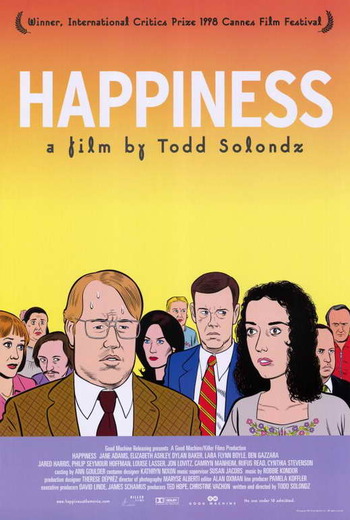 Happiness is a 1998 Black Comedy film written and directed by Todd Solondz, in what is seen as his greatest and most controversial work.

The film follows the lives of three sisters trying to find Happiness in their lives: Older sister Trish Maplewood (Cynthia Stevenson), a Middle Class housewife whose married to psychiatrist Bill Maplewood (Dylan Baker) who is secretly a pedophile; Helen Jordan (Lara Flynn Boyle), the middle sister, a successful author who is loved and adored by everyone around her but is in constant despair over the fact she feels no one loves her for her, but finds a bit of excitement when her neighbor, Allen (Philip Seymour Hoffman), wants to violently have sex with her; and finally there's Joy (Jane Adams), the youngest sister who is overly sensitive and feels she lacks a purpose in life. She later decides to become a teacher for russian immigrants, where she starts a relationship with her student, Vlad (Jared Harris)

The film had a loose sequel, Life During Wartime released 11 years later. None of the cast from this film appeared in the sequel.

Not to be confused with Happiness, or the emotion.