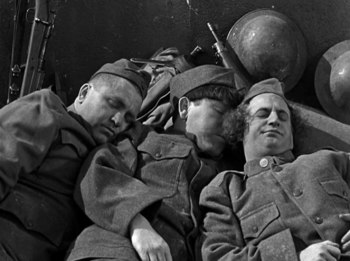 The most dutiful men in the army.
The Stooges become discharged after hearing that World War I is over desperate not doing anything. After being discharged, they get back at their Sargent, MacGillicuddy (Stanley Blystone), for how he treated them. 17 years, they find themselves despite for a job, so they get a suggestion by a man (Vernon Dent* in his first appearance) to sign up at a recruiting station. Little did they know, they find out they'd signed up for the army. To make matters worse, MacGillicuddy was there, and will he get even with them.