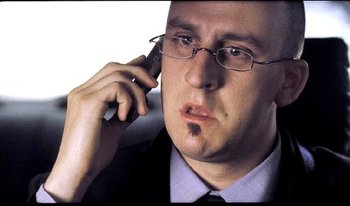 A man named Tim is stuck in traffic on the highway after work. He pulls out his brand-new cell phone (this being 2001, it's a flip phone with a little antenna) and calls home. His little daughter picks up the and when asked, tells her father that mommy is upstairs with Uncle Wim.

The problem? The family has no Uncle Wim.