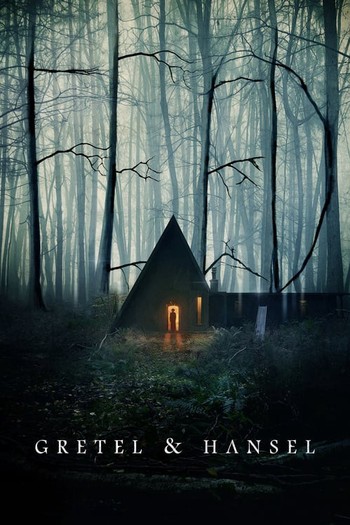 "Follow the crumbs."
"A fairy tale has a way to get into your head."
— Gretel
Advertisement:

Gretel and Hansel: A Grim Fairy Tale, is a 2020 American supernatural horror Grimmification adapted from Hansel and Gretel. The film is directed by Oz Perkins (The Blackcoat's Daughter, I Am the Pretty Thing That Lives in the House), produced by Fred Berger, Brian Kavanaugh-Jones, and Dan Kagan, and the screenplay is written by Perkins and Rob Hayes. In the film, Gretel leads her younger brother Hansel through the forest in search of work and food after being kicked out of their family home. They stumble upon the home of a witch. Starring Sophia Lillis as Gretel, Sam Leakley as Hansel and Alice Krige as Holda, the Witch.