You may be looking for the 1956 Americanized adaptation, Godzilla: King of the Monsters! 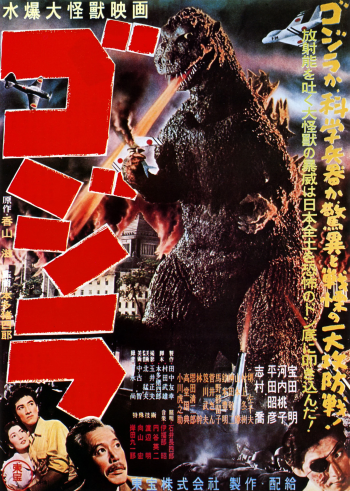 "A great battle of wonder and terror!" But can you really call it a fair fight?
"Bombs vs. bombs. Missiles vs. missiles. And now a new superweapon to throw upon us all. As a scientist, no, as a human being, I cannot allow that to happen."
— Dr. Daisuke Serizawa after his Oxygen Destroyer is revealed to Hideo Ogata
Advertisement:

In The '50s, Cold War tensions were high, movie monsters created or awakened by nuclear explosions were a thing, and the monster could be defeated in a scientific way. Godzilla introduces, and invokes, a new type of radioactive monstrosity in a new, darker way...

Godzilla (or Gojira, the literal Hepburn romanization), is a black and white kaiju tokusatsu film directed by Ishir⁠ō Honda in 1954 and the first film of the Godzilla franchise.

Released on November 3rd, 1954, the film is notorious for its story, which is written by legendary sc-fi writer Shigeru Kayama. The genesis of the film happened when producer Tomoyuki Tanaka read a news article involved a US nuclear test at the Bikini Atoll, codenamed Castle Bravo, which detonated a 15 megaton hydrogen bomb in March 1st, but that's not the full story. A Japanese fishing boat, the Daigo Fukuryū Maru was caught by the burst of the radiation explosion, irradiating her crew, and one of the crew members died of radiation poisoning. This international crisis and the possibility of irradiated fish poisoning fish markets put the country on edge.

Chosen to direct the film was Ishiro Honda, who was a former foot soldier during World War II who already had an extensive career as a director and his old friend, special effects guru Eiji Tsuburaya. Once Honda was released as a prisoner of war, he went home only to find out what happened to Hiroshima: destroyed by the Little Boy atom bomb in August 6, 1945 which haunted him forever. And thus, the film is a metaphor for their destructive power. The opening scene is a direct reference to the Castle Bravo test, and Godzilla's rampage in the second act symbolizes the atomic bombings. While set up originally as a horror film, this film established Kaiju as a genre of its own, in addition to beginning one of the greatest franchises in the world.

In the middle of the Pacific, a mysterious flash of light destroys a fishing boat, the Eiko Maru. News of the ship's disappearance reaches Japan where they sent a rescue boat, the Bingo Maru. However, it too shares the same fate. Then a fishing raft belonging to the natives of Odo Island finds the missing crew, but suffers the same fate leaving a single survivor. Village elder Inada (Keiji Sakakida) believes the lack of fish is caused by the island's god, Godzilla, and a ceremony was performed to appease him. However, Godzilla lands onto the shore of Odo Island, killing villagers, farm animals, and destruction its wake. Japan then sends a research crew to Odo Island to discover that Godzilla is a radioactive prehistoric monster, and Dr. Kyohei Yamane (Takashi Shimura) states the monster was awaken by a hydrogen bomb test in the Pacific.

Meanwhile, Emiko Yamane (Momoko Kochi), the doctor's daughter, went to see her estranged fiancé, Dr. Daisuke Serizawa (Akihiko Hirata), and he may have the key to defeat Godzilla.

Despite debuting to poor reception in Japan initially, Gojira (or Godzilla, take your pick), was praised by American viewers after the original cut was made available outside of Japan with two DVD releases, by Classic Media and The Criterion Collection. The English version, Godzilla: King of the Monsters! was edited to add American reporter Steve Martin (Raymond Burr), which sees its release in its home country of Japan called Kaiju-Oh Gojira. There is also the Italian version, Cozzilla, a much stranger recut that includes colorization and Stock Footage from World War II.

Godzilla is a much more grounded, bleak and haunting film than its successors, so viewers visiting the film after a bout with the more fantastical later installments may be surprised at its somber tone and unsubtle allegories.

Until 2014, this film was the headstart of every Continuity Reboot. Godzilla (2014) was the first film in the series' franchise to get a fresh start with no ties with this one.

For the sequels taking place after this film, see Godzilla Raids Again, The Return of Godzilla, and various Millennium series films. Godzilla vs. Megaguirus and Godzilla: Final Wars continue the story where the original Godzilla lives.

The unromanized title is not to be confused with the French progressive death metal band Gojira.

open/close all folders
A - C
D - H
I - N
O - T
U - Z
"I can't believe Godzilla was the last member of his species. But if we continue to conduct nuclear tests, then someday, somewhere, another Godzilla may appear."
Feedback

Godzilla lets out one final roar before he dies at the hands of the Oxygen Destroyer.

Godzilla lets out one final roar before he dies at the hands of the Oxygen Destroyer.