This page contains unmarked spoilers for Unbreakable and Split. You Have Been Warned! 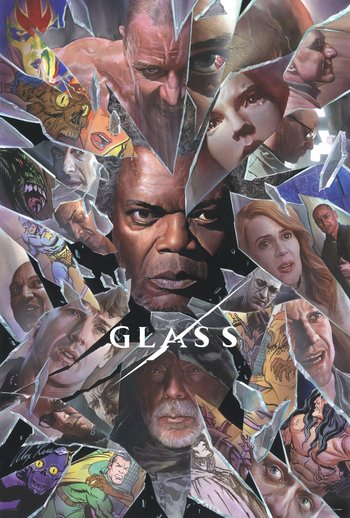 You cannot contain what you are.
"Everything we will see and do will have a basis in science. But it will have limits. This is the real world, not a cartoon. And yet some of us don't die from bullets. Some of us can still bend steel. That is not a fantasy."
— Elijah Price / Mr. Glass
Advertisement:

Glass is a psychological superhero thriller film. It is the crossover sequel to both 2000's Unbreakable and 2017's Split, directed and written like them by M. Night Shyamalan, and stars Bruce Willis as David Dunn/The Overseer, Samuel L. Jackson as Elijah Price/Mr. Glass, James McAvoy as Kevin Wendell Crumb/The Horde, Anya Taylor-Joy as Casey Cooke, Spencer Treat Clark as Joseph Dunn, Charlayne Woodard as Ms. Price and Sarah Paulson as Dr. Ellie Staple. It was released on January 18, 2019.

David Dunn tries to stay one step ahead of the law while delivering vigilante justice on the streets of Philadelphia. His special abilities soon put him on a collision course with the Beast – a psychotic madman who has superhuman strength and 23 distinct personalities. Their encounter leads them to Mr. Glass, a criminal mastermind who holds critical secrets for both men.

Also notable for the fact that Universal Pictures and Disney have produced and distributed the movie together, with Disney using the Buena Vista International brand for the release of the film.

Has nothing to do with the Interactive Fiction retelling of Cinderella by Emily Short, or the Yu-Gi-Oh! fanfic.