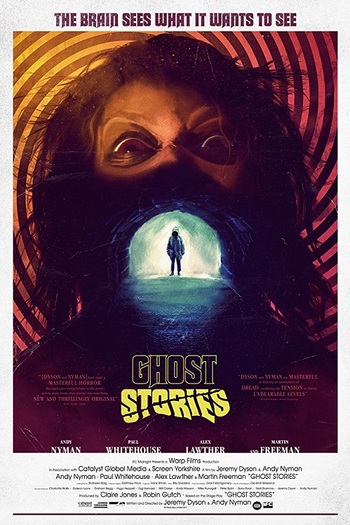 Ghost Stories is a 2017 supernatural Horror film written and directed by Jeremy Dyson and Andy Nyman, adapted from their successful stage play. Starring Andy Nyman as Professor Phillip Goodman, a present day professional skeptic who debunks stage psychics and mediums. Goodman was heavily influenced in his youth by another professional skeptic, Dr. Charles Cameron, who vanished without a trace sometime in the 70s. When Professor Goodman is contacted by Dr. Cameron (ill, elderly, and seemingly at death's door, but certainly not missing), he insults Goodman's body of work, calls his own work shameful, and asks Goodman to investigate 3 supernatural cases that have haunted him since his disappearance. The investigations themselves are disturbing and unsettling, and all the while there are subtle background clues that something else is going on.

A loving homage to the Amicus Productions anthology films of the 60s and 70s, Ghost Stories captures the British aesthetic of those films, while still retaining its modern sensibility. Features a rather nasty Twist Ending.