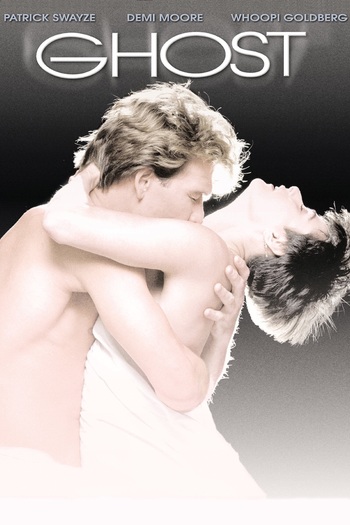 Mmm, ghost sex.
Sam: Molly, you're in danger.
Oda Mae: Now, you can't just blurt it out like that! And quit moving around, will you? 'Cause your starting to make me dizzy! I'll just tell her in my own way! (to Molly) Molly...you in danger, girl.
Advertisement:

Ghost is a 1990 film directed by Jerry Zucker, starring Patrick Swayze, Demi Moore, Tony Goldwyn, and Whoopi Goldberg in the performance that won her an Academy Award for Best Supporting Actress (which she attributes to Swayze insisting on her being cast in the part).

Executive Sam Wheat and his artist girlfriend Molly are a pair of yuppies living in SoHo in New York City. They're in love, though Sam seems to have a little difficulty coming right out and saying it, and can only manage "ditto" when Molly tells him she loves him.

On their way home one night, Sam is mugged and killed. This is where the actual story begins, as the violent murder (plus the fact that Sam had the unfinished business of never truly telling Molly he loves her) causes him to stick around as a ghost. Then Sam discovers there's more to his death than just making him an unfortunate statistic in mugger-prone New York.

In 2010, a Foreign Remake was made in Japan, where Sam's character is now a woman trying to protect her husband. A musical production of Ghost hit Broadway in 2012. It has its own separate page here.

Not to be confused with the 1997 short film Ghosts, starring Michael Jackson, or the 2005 book Ghost by John Ringo.