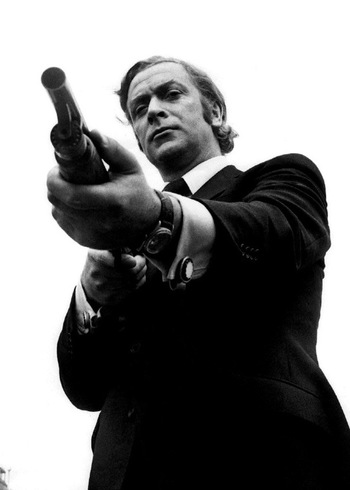 "You're a big man, but you're in bad shape. With me it's a full time job. Now behave yourself."
— Jack Carter
Advertisement:

A 1971 British crime film directed by Mike Hodges and starring Michael Caine as Jack Carter, a prominent London Gangster who returns to his hometown of Newcastle, England to find out who killed his brother. The work has come to be regarded as a classic in the gangster film genre.

The film itself is a deliberate Deconstruction of the gangster film genre it has become a classic of. Caine himself was determined to avert the feel-good or comedy aspects of The Caper style gangster movie, in favour of a Darker and Edgier gritty realism, saying;

"One of the reasons I wanted to make that picture was my background. In English movies, gangsters were either stupid or funny. I wanted to show that they’re neither. Gangsters are not stupid, and they’re certainly not very funny."