Film / From Russia with Love 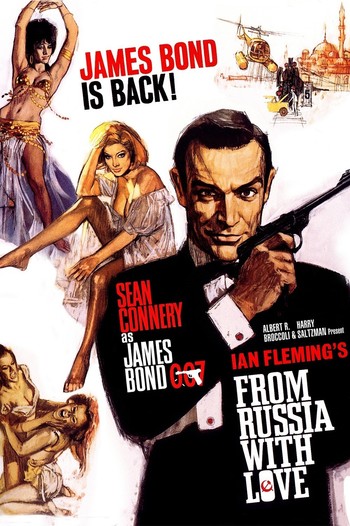 From Russia with love, I fly to you...
"Let his death be a particularly unpleasant and humiliating one."
— Number One, head of SPECTRE
Advertisement:

The One With… the knife-shoe.

The second James Bond film in the Eon Productions series, From Russia with Love was directed by Terence Young once again and starred Sean Connery once again. Released one year and four days after Dr. No, it came out on October 11, 1963 in the UK.

James Bond is tasked with escorting a defector clerk from USSR to the West and a Soviet coding machine. Of course, she's female and very attractive. It all turns out to be a deadly trap set up by the SPECTRE organization to get rid of him and acquire the machine.

Notable scenes in this film:

This film and its title are so well known that variations on the title are common as newspaper headlines for articles to do with Russia. A London exhibition of pre-Red October Russian art, sponsored by the Russian government, couldn't resist a gag, calling itself From Russia.

Over 40 years later the film was adapted into a video game for 6th-generation consoles, 007: From Russia with Love, with Sean Connery reprising his iconic role for the last time before his passing.

It was the last James Bond film that Ian Fleming saw before his death in 1964, a month before the release of the sequel, Goldfinger.

From Russia, with Tropes:

The End
Not Quite The End
James Bond will return in the next Ian Fleming thriller, Goldfinger.

Red Grant puts on a pair of gloves while keeping Bond at gunpoint.

Example of:
These Gloves Are Made for Killin'

Red Grant puts on a pair of gloves while keeping Bond at gunpoint.