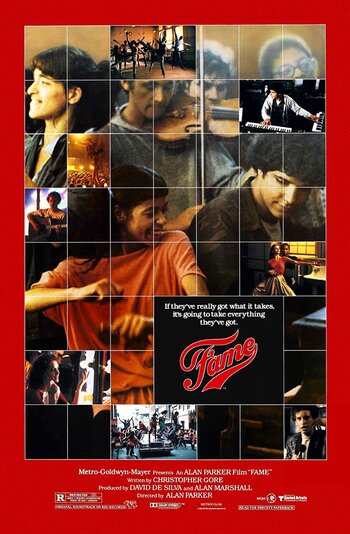 A 1980 musical drama film directed by Alan Parker, Fame is the story of some students of the High School of Performing Arts, a very exclusive Real Life school in New York City (which has since been merged with the High School of Music & Art to become the Fiorello H. LaGuardia High School of Music & Art and Performing Arts). The students find themselves cooperating among themselves and with the faculty, even as they compete for chances in the real world to make their dreams of stardom come true, and deal with the personal and professional obstacles that stand in their way.

The original film earned two Academy Awards, for its music score and title song. A remake film directed by Kevin Tancharoen (yes, the Mortal Kombat: Legacy guy) was released in 2009. There is also a musical stage adaptation which has had many productions over the years.