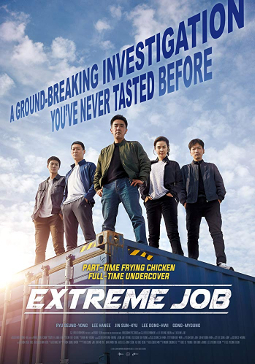 Some times it takes a whole lot of chicken to catch criminals.

Extreme Job is a 2019 South Korean crime-comedy film, directed by Lee Byung-Hun. The film focuses a team of quirky narcotics detectives down on their luck, who constantly fails to catch their targets and only succeeds in causing property damages and getting their cases stolen. The chief of police gives them an ultimatum: solve a big case or the team gets dismantled.

Desperate to make the best of their last chance, they ended up working under cover in a chicken joint to try and bust a gang of an infamous organized criminals. Hilarity Ensues when their special recipe unexpectdly turns the run-down restaurant into the new hottest eatery in the district, attracting attentions from media, other law enforcement units, and even the very criminal cartel the team is hunting down.

Extreme Job proved to be both critically acclaimed and commercially successful in South Korea, becoming the highest grossing Korean comedy film of all time and fourth in general, as of this editing.