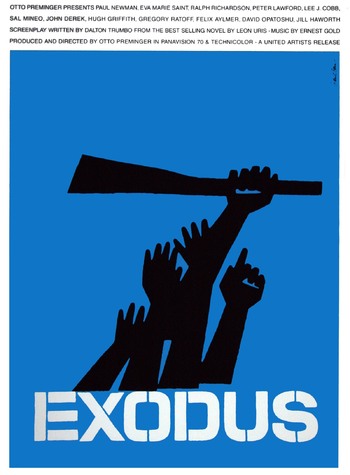 Exodus is a 1960 epic film directed and produced by Otto Preminger with a screenplay by Dalton Trumbo, based on a 1958 novel by Leon Uris about the founding of the modern state of Israel. The story follows a collection of characters in 1947 and 1948 as they fight the British (in order to gain independence for Israel and support for the Partition Plan) and then the Arabs (to keep their newly-established nation).

Ernest Gold's original music score won an Oscar, beating out other celebrated scores such as Spartacus, The Alamo, and The Magnificent Seven.

Not to be confused with the Book of Exodus (though the allusion to it in the title is very intentional) nor one of its adaptations, Exodus: Gods and Kings.