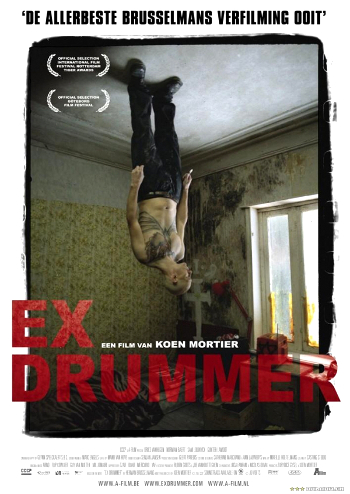 His world is most literally turned on its head.

Ex Drummer is a Flemish film from 2007, somewhere in between surrealist drama and very dark (tragi-) comedy, written and directed by Koen Mortier and based on the book of the same name by Herman Brusselmans. Apart from its explicit depictions of sex and violence and its somewhat misanthropic attitude, the film is also noted for its iconic soundtrack with songs from several local and international alternative, punk and metal acts.

Cynical best-selling author Dries Vanhegen is one day approached by three ragged lower-class men who want to hire him as a drummer for their punk rock band; their trademark being having more or less obvious handicaps. The men in question are Koen de Geyter, a lisping skinhead with sadistic tendencies and a virulent hatred for women; furthermore Jan Verbeek, a homosexual with a stiff arm, serious mother issues and a psychotic father he needs to keep confined in a straightjacket; and finally Ivan Van Dorpe, a near-deaf drug addict with an equally unhinged wife and a baby daughter she keeps silent by feeding her hashish. Intrigued at the prospect of a new story, Dries decides to join them and descend into their world of filth and squalor. As for his own handicap, he pretends being an incompetent drummer. From then on, the four men go by the name "The Feminists".