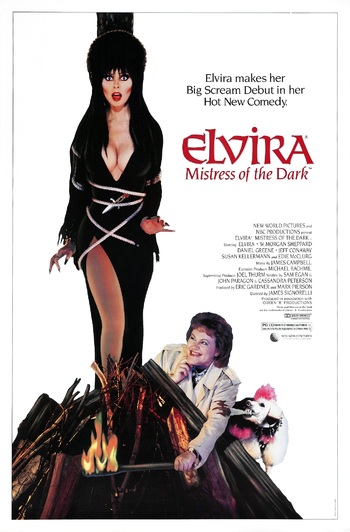 Elvira: Mistress of the Dark is a 1988 Horror Comedy film starring the Mistresss of Darkness herself, Elvira. This was one of NBC's few theatrical features (a co-production with New World Pictures).

After getting fired by her Slimeball boss, Horror Host Elvira plans to try luck opening an act in Las Vegas, but is short in money to do so. Learning that her great-aunt Morgana has died and left her part of her will, she decides to travel to the small town of Falwell, Massachusetts to claim the inheritance.

But things won't be so easy to her, as her great-uncle Vincent is also interested in getting a hand of the inheritance, not helped by how the small town locals and their Morality Council are out to try to get rid of Elvira by all means necessary...

Elvira: Mistress of the Dark provides examples of: