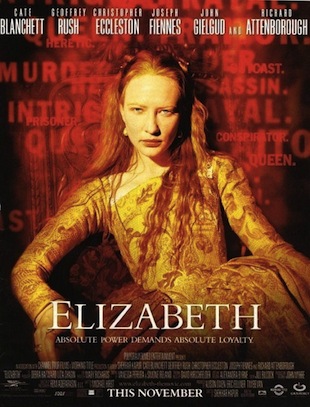 "Observe, Lord Burghley. I am married... to England."
— Elizabeth

A 1998 Biopic of the early life of Queen Elizabeth I of England starring Cate Blanchett in the title role. It broke the usual "period piece" mould of English biographical pictures in that it was directed by an Indian, Shekhar Kapur, took a much more dramatic style of storytelling, and didn't shy away from some historical truths of the era, such as dirt, poverty, and torture.

Followed by a 2007 sequel, Elizabeth: The Golden Age with the same director and Cate Blanchett once again as the Virgin Queen.