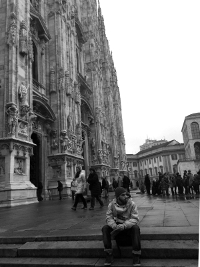 Golden boy, golden boy, where have you been?
A character referred to only as "The Silver Girl" wanders through a grey afterlife followed by her invisible lover ("The Golden Boy") and accompanied by something which may or may not be an angel.
Advertisement:

This 2014 film is a surrealist retelling of the myth of Orpheus and Eurydice, often eschewing such banalities as plot, setting, names, and basic coherency, in favor of characterization and study of the complex relationships between the three main characters.