Film / E.T. the Extra-Terrestrial
aka: ET 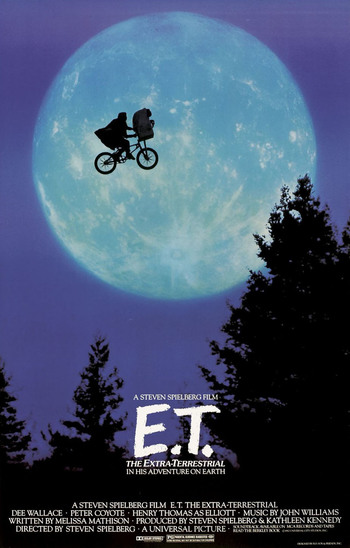 E.T. the Extra-Terrestrial is a 1982 Science Fiction film directed by Steven Spielberg, with the screenplay written by Melissa Mathison. By the end of its initial theatrical run (which ran from early June of 1982 into early June of 1983), it had unseated Star Wars as the highest-grossing film of all time, and adjusted for inflation it currently stands as the 7th highest-grossing film of all time. John Williams' score, flying bicycles, and an Ugly Cute alien hero are just the tip of the iceberg here. The film became so iconic that Spielberg started using the flying bicycle scene as logo for Amblin Entertainment.

In 2019, Xfinity released a four minute ad in which ET returns and catches up with a now adult Elliott, again played by Henry Thomas who stated doing a full feature film sequel likely wouldn't work, but this was the perfect way to follow up on the story. Spielberg agreed, and named the ad an official part of the film's canon.note Melissa Mathison, who wrote the film's screenplay, had sadly died a few years earlier before she could give her own take on it.

ET The Extraterrestrial had the E.T. Cereal, a chocolate and peanut butter flavored product where the kernels were shaped like the letters "E" and "T".

ET The Extraterrestrial had the E.T. Cereal, a chocolate and peanut butter flavored product where the kernels were shaped like the letters "E" and "T".