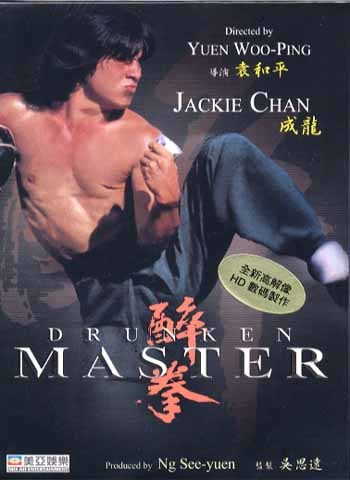 Jackie Chan's fourth starring role, and the one that put him on the map.

Wong Fei-hung is a young, irresponsible martial arts student who, in the space of one day, manages to anger his kung fu instructor by demonstrating that the instructor was an incompetent in front of the entire class, antagonize his aunt by making advances towards her daughter, and a local nobleman for beating the crap out of his (very snooty) son. As punishment, his father sends him to train under Beggar So, who has a reputation for crippling his students. Naturally, Fei-Hung doesn't like this idea, and so he escapes, only to run into Beggar So, who gives him brutally rigorous training. At first, Fei-Hung hates his mentor, but he comes to respect him and becomes a much more proficient martial artist. At the end, Fei-Hung uses his new knowledge to defeat an assassin after his father.

Later, there was a sequel of sorts in the form of Drunken Master II, released in North America as Legend of Drunken Master. Wong Fei-Hung accidentally comes into possession of several valuable Chinese artifacts, which smugglers are trying to sell to Evil Brits. In 2005, Time Magazine declared this movie one of the All-Time 100 Movies, and Roger Ebert rates the climactic foundry fight as probably the best fight scene ever committed to film.

A third movie, titled Drunken Master III, was released in 1994, but without Jackie Chan's involvement. Instead, Willie Chi gets to play Wong Fei-Hung, also starring Andy Lau as a gunslinger and Simon Yam as a homosexual villain.