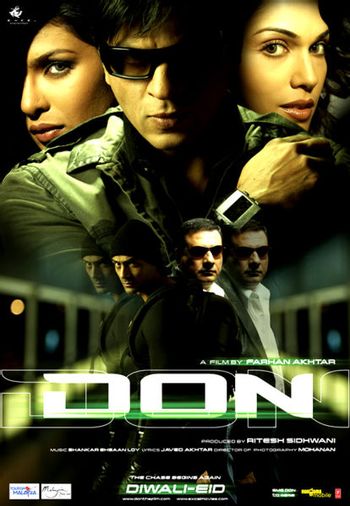 A 2006 Bollywood film, and Farhan Akhtar's remake of the 1978 film starring Amitabh Bachchan. This version stars Shah Rukh Khan, Priyanka Chopra and Kareena Kapoor. Follows the conflict between an Indian drug lord's lieutenant (a man known as Don), and his arch-rival; the cop DCP De Silva. After Don's death, De Silva replaces him with his lookalike Vijay in order to dismantle the drug cartel. Two other subplots involve Jasjit (who was screwed over by De Silva) and Roma (who was screwed over by Don.) Many many action scenes ensue.
Advertisement:

There is a sequel.