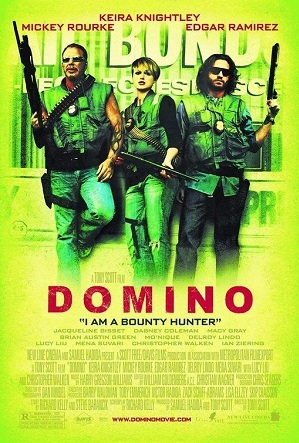 The movie dramatizes the life of Domino Harvey

, the daughter of Hollywood film star Laurence Harvey, who decided to become a bounty hunter after rejecting a Stepford Smiler life as a fashion model in Beverly Hills society. Arrested after a shoot-out in the Las Vegas Stratosphere tower that left Domino the only survivor and apparently connected to an 10 million dollar armed robbery on an armored transport three days before, Domino chronicles her lifestory before a criminal psychologist.

Except for a dedication, the film does not mention that the actual Domino Harvey died of a drug overdose just a few months before the movie was released.