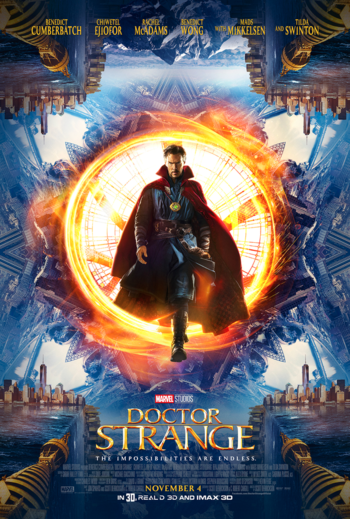 Open your mind. Change your reality.
The Ancient One: Arrogance and fear still keep you from learning the simplest and most significant lesson of all.
Doctor Strange: Which is?
The Ancient One: It's not about you.
Advertisement:

Doctor Strange is a 2016 American superhero film based on the Marvel Comics character of the same name, and both the fourteenth film entry of the Marvel Cinematic Universe and the second installment of Phase 3. The film is directed by Scott Derrickson (The Exorcism of Emily Rose, Sinister) and written by Jon Spaihts and C. Robert Cargill, with some additional material by Dan Harmon added during reshoots.

Its story revolves around Doctor Stephen Strange (Benedict Cumberbatch), a brilliant neurosurgeon whose career is ruined after a car accident causes irreparable nerve damage in his hands. Searching for a means to cure himself, Strange travels to Kamar-Taj where he encounters the Ancient One (Tilda Swinton), who offers to help Strange in exchange for him becoming their latest disciple in a Secret War against the supernatural evils of the universe.

Following the character's introduction in this movie, Doctor Strange would go on to become a major player in Phase 3 of the MCU, starting with a small but significant cameo in Thor: Ragnarok, a major role in Avengers: Infinity War, and a supporting role in Avengers: Endgame. In Phase 4, he also plays a big part in Spider-Man: No Way Home, while an episode of What If...? showcases a universe where the events of Doctor Strange play out somewhat differently; the Season 1 finale of said series features the aforementioned alternate version of Strange in a major role. A sequel to Strange's debut film, titled Doctor Strange in the Multiverse of Madness, was released in 2022.

Not to be confused with Doctor Strangelove.

open/close all folders
Tropes A to D
Tropes E to L
Tropes M to R
Tropes S to Z
"So Earth has wizards now?"
Feedback