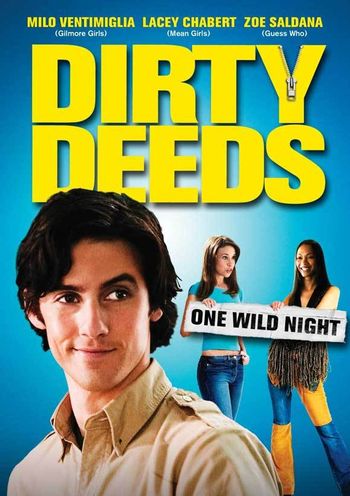 One guy with a crush. One hottie with a brain he's out to impress. One sociopathic school bully. One wild night full of dares that could potentially land the doer in jail. It's Dirty Deeds, the 2005 raunchy teen comedy that relies on the most basic of tropes and has the most predictable plot.

Full of Retroactive Recognition galore and a laughably exaggerated spin on the teen comedy genre, this movie follows Zach on his quest to win over his brainy beauty after her dorky younger brother agrees to take on the school bully by engaging in dares to prove he's tough. To get her brother off the hook, he does the deeds and ends up getting way more than he bargained for. . . like an ex criminal friend, a model's bra and most importantly, the girl. Cliches follow.