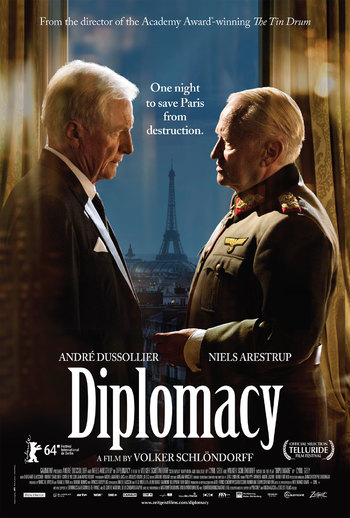 Diplomacy (in French Diplomatie) is a 2014 Franco-German film directed by Volker Schlöndorff, starring André Dussollier and Niels Arestrup. It is based on a 2011 play of the same title by Cyril Gély.

On 22 August 1944, as the Allied forces are approaching Paris, General Dietrich von Choltitz (Arestrup), commander of the Groß Paris (the German troops occupying the city), is ordered by Adolf Hitler to destroy the city. All night long, Raoul Nordling (Dussollier), a Swedish consul, tries to dissuade him from doing it.

See also Is Paris Burning?, an older take on this story with Orson Welles and Gert Fröbe in the same roles, albeit as just one storyline among many others in the bigger picture of the Liberation of Paris.