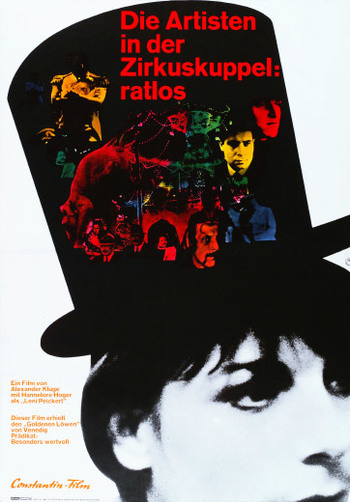 Die Artisten in der Zirkuskuppel: ratlos is a 1968 West German film. It has no official English title, and has been given at least the names Artists in the Big Top: Perplexed, Artists under the Big Top: Perplexed (most idiomatic) and The Artist in the Circus Dome: Confused (most literal) in different translations.

It is a mockumentary-style artistic storytelling form film, in which newsreels, documents, and quotations are intercut with the story of a failing circus. In addition, this is intended to be reflective of the director Alexander Kluge's attempts to invent the movement of the German New Wave, which wasn't going very well (it is also an example of the German New Wave).

It won the Leone d'Oro.

Tropes under the Big Top, perplexed: