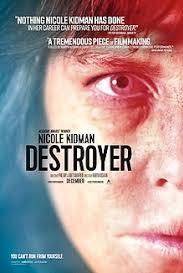 You can't run from yourself.
Advertisement:

Destroyer is a 2018 crime drama film directed by Karyn Kusama, starring Nicole Kidman as Erin Bell, a guilt-ridden LAPD detective forced to revisit an undercover assignment that still haunts her.

The film made its debut at the Telluride Film Festival in August 2018.

Nothing to do with the KISS album of the same name.